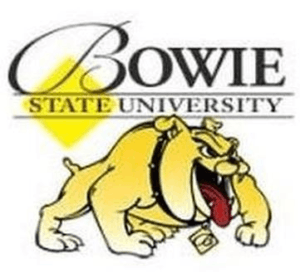 ation Day at Bulldgos Field, the Bowie State Bulldogs took on Virginia Union Panthers Saturday afternoon in a battle for the top spot in the CIAA Conference.

The Panthers (5-3; 4-1 CIAA) came into the game undefeated in conference play, while the Bulldogs (7-1; 4-1) knew with a victory they would hold the tie-breaker over their foes.

Bowie State would jump out to a 27-point lead before the Panthers would have a scoring frenzy in a matter of minutes to nearly come back and tie the game back up before the Bulldogs would pull away for good.

Bulldogs R-Shirt Senior RB Robert Chesson was the MVP of the game as he would rush for two touchdowns and would catch two more touchdown receptions of seven and 63 yards.

Junior QB Amir Hill was stellar for the Bulldogs as he would connect on 25 of his 44 passes for 386 yards, have three touchdowns, but he would throw one interception.

Panthers Junior QB Darius Taylor would finish only 14 out of 41.  He would throw for 179 yards and have two touchdowns and two interceptions.

This was a tale of two different games.  The entire first half Bowie State dominated on both sides of the ball and found themselves leading at halftime, 20-0.

When Chesson scored from three yards out on his second rushing touchdown, Bowie State would have it’s biggest lead of the game, 27-0 with 9:10 left in the third quarter.

Virginia Union would finally answer on it’s next offensive possession.  They would drive the ball 69 yards on 13 plays as Taylor hit Junior WR Jewison Dawkins in the end zone from five yards out and the Panthers were finally on the scoreboard.  The extra point missed and Bowie State now had a 27-6 advantage.

The Panthers defense must have been paying attention to the offense because on the very next Bulldogs drive, Panthers Senior LB Karl Calhoun would strip the ball out of Bulldogs R-Shirt Sophomore WR Deron Smith’s grasp and Calhoun’s teammate, R-Shirt Junior DB Cokenya West recovered the ball at the Bulldogs 39 yard line.

Only one play after the fumble, Panthers Junior WR Lavatiae Kelly would fool the Bulldgos completely, throwing a strike to Senior WR Chazton McKenzie for a 39-yard touchdown reception and it less than two minutes of game clock, Virginia Union closed the gap down to 27-13.

The fans sitting in the bleachers at Bulldogs Stadium would have even more reason to get worried as on the next Bulldogs possession, after a short Chesson run netted three yards, Hill threw his one interception as Panthers Freshman DB D’Andre Walker would pick Hill off at the Bulldogs 38.

Definitely seizing the momentum full force, Virginia Union would only need six plays to go 33 yards in 1:48 and just like that, the Panthers were within one score, 27-20.

Each team would punt the ball away on their respective drives and the Bulldogs would get the ball back with 9:18 left.  It was now their turn to only need one play to score a touchdown when Hill connected with Chesson on a 63-yard reception that would give Bowie State a 33-20.

Setting up the extra point, the snap would be fumbled and picked up by the Panthers and returned to their end zone for two points and making the score 33-22.

The Panthers next drive would stall at their own 41 and would have to punt back to the Bulldogs.  Bowie State looked to to eat up a lot of the 6:03 that was remaining on the game clock as they took over possession at their own 32.  But the Panthers defense would cause a three and out and the ball was punted back to the Panthers.

This time, though, the Panthers would shot themselves in their own feet.  The first play coming onto the field resulted in a delay of game penalty.  Taylor would then get sacked by three Bulldogs for a loss of nine yards.  After an 11-yard completion to Sophomore WR Gustavious Dames, the Panthers were looking at 3rd and 13 at their own 21.  Taylor tried again to hit Dames but he dropped the pass and the Panthers called time out facing 4th and 13 and 3:25 left on the clock.

Coming out of the time out, Taylor looked sharp and hit Dawkins for 22 yards and a first down, but the Panthers were penalized for having an illegal formation, erasing the first down off the board and pushing the ball back five yards to the own 16 and 4th and 18.  Taylor’s pass intended for Dames was hurried and the Panthers wound up turning the ball back over to the Bulldogs with 3:10 left.

Just one play later, Hill threw his third touchdown pass of the game.  This time he found Freshman WR Marquise Watts for 16 yards and a 40-22 lead.

Virginia Union took the ensuing kickoff to their own 35. But, on Taylor’s last passing attempt of the game, he would find not his receiver but Bulldogs Sophomore DB William Flowers for an inteception.  The Bulldogs would then run out the clock and claim the victory.

There are only two games left in the Bulldogs regular season before the CIAA Championship game will be played in the middle of November.

Next Saturday is the Bulldogs final home game of the year when Lincoln University (PA) Lions (1-6; 0-3 CIAA) comes to Bulldogs Stadium on Senior Day for the Bulldogs.  Kickoff is scheduled for 1:00 PM.