Washington Capitals senior vice president and general manager Brian MacLellan announced this morning that they have sign prospect forward Riley Sutter to a three-year entry-level contract with an average annual value of $817,500.

“Surreal feeling signing my first NHL contract. Thank you @Capitals and everyone who has supported me along the way!#ALLCAPS”

The Canadian, 18-year-old-6’4 and 209 lbs was selected by the Washington Capitals with the 93rd-overall pick, in the 3rd round of the 2018 NHL Draft. In the Prospect Showcase in Florida he led the Capitals in goals and tied for first in points. Sutter had made made his NHL debut in the preseason game against the Boston Bruins on September 18. He was ranked 45th overall among the North American forward by the NHL Central Scouting. Last season, he register 53 points out of 68 games with the Everett Silvertips, ranking 5th from his team in goals. In the 21 playoff games with the Everett he added 19 points.

This comes as no surprise because he comes from a fine bloodline of great hockey players. His father is Ron Sutter who was first drafted by the Philadelphia Flyers in 1982 and accumulated 535 points in 1,093 games playing for the Philadelphia Flyers, St. Louis Blues,Quebec Nordiques,New York Islanders, Boston Bruins, San Jose Sharks and the Calgary Flames. Also, Riley Sutter has five uncles: Darryl, Duane, Brian, Rich and Brent Sutter. who played in the NHL.

Welcome to the Washington Caps! 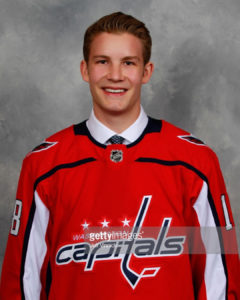