The Washington Capitals have signed defenseman Martin Fehervary to a three-year, entry level contract. The Caps selected Fehervary in the 2nd round with their 46th overall pick of the 2018 NHL Draft.

Fehervary is 18 years old, 6’2, weighs 194 pounds, and will likely start his career with the Capitals farm team, the Hershey Bears. Prior to being drafted, Fehervary played 32 games for the Malmo Redhawks, a U-20 team in the SuperElit League. For Fehervary’s age, skating on the ice for a team that is meant for players that are 2 years older than him is absolutely impressive.

In my opinion, Fehervary will have to outplay young studs such as, Shane Gersich and Travis Boyd to make it to the reiging Stanley Cup Champion roster.

Here’s a tweet from the Washington Capitals about the signing of Martin Fehervary: 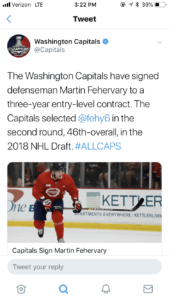