Bears come out on top in Providence, and beat the Bruins 4-1 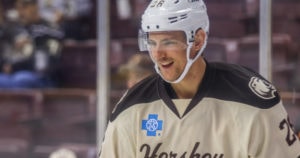 It didn’t take long for Hershey to get their first goal against the Bruins. Riley Barber beat Providence goalie Zane McIntyre. The tally came on the power play 2:27 into the first period. Liam O’Brien and Chris Bourque tallied their third and seventeenth assist on the goal. Just over three minutes later Mathius Bau  would score his fourth goal in three games putting the Bears up 2-0 at 5:57. Tyler Graovac earned his first point with Hershey getting an assist along with Riley Baber on Bau’s first goal of the game.

In the second period, it would be Matias Bau again, when Mason Mitchell and Peluso would feed him the puck at 12:19 making it 3-0 Hershey. This would be Peluso’s first assist as a Hershey Bear and M.Mitchell’s first career AHL point.

The third period rolled around with the bears leading 3-0 until an unassisted goal from Justin Hickman at 2:16 would make the score 3-1. However, the Bears held strong killing six of all six penalty kills, including two five on three’s to keep their lead. Six seconds before the end of the game Tyler Graovac would score his first goal with Hershey on the empty net making the final score 4-1 while Bau would gain another point with an assist.

The Bears will match up with Providence yet again on Sunday. Puck drops at 1:05pm at Dunkin’ Donuts Center in Providence. Then the Bears will be back in Hershey the night before Thanksgiving, Wednesday November 22, to take on The Springfield Thunrderbirds at 7pm!