Bears come out on top against Syracuse at home.

The Hershey Bears took on the Syracuse Crunch at the Giant Center on Wednesday night and were down 1-0 after two periods of play with a goal scored by Syracuse Crunch center Anthony Cerelli in the beginning of the second period. 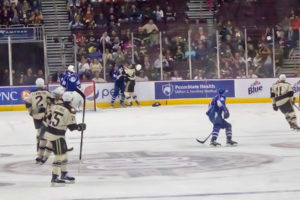 Mason Mitchell and Reid McNeill would drop gloves during period two sparking the Bears and helping push them towards victory.

Coming into the third period something beautiful happened as Jeremy Langlois scored his second goal of the season just 27 seconds into game play. The goal was set up by Liam O’Brien, his second assist of the season as well as an eighth for Colby Williams. The rest of the period would quickly turn into something of chocolate and white beauty. 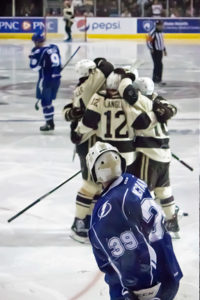 4:05 into the period and Wayne Simpson made it look easy with a gorgeous pass to Chris Bourque which resulted in his sixth goal of the season. The bears took the lead 2-1. Unfortunately, less than three minutes later Syracuse responded when Dennis Yon fed the puck to Alexander Volkov and it was tied up at 6:57. 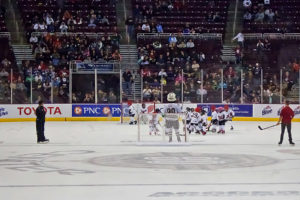 at intermission as the

PBK Tykes took to the ice!

It wasn’t over for Hershey as Chris Bourque scored his seventh goal of the year, and second of the night with only seven minutes left to play bringing the bears up 3-2. His goal was assisted by Wayne Simpson(6) and Travis Boyd(15). With Lucas Johansen turning 20 years of age 11.16.17, what better way to celebrate than a birthday empty net goal to make the game 4-2 with just 8.6 second left in the game! 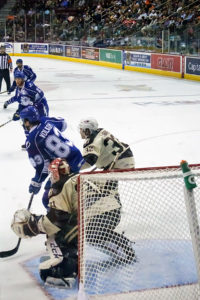 Copley saw 22 shots and stopped 20 making this his 4th straight win since coming off an injury. He’s back and we like it! The Bears now head to Providence where they will face the Bruins on Friday and Sunday evenings. The two game road trip will then lead into another Wednesday night tilt, this time with the Springfield Thunderbirds at 7pm.