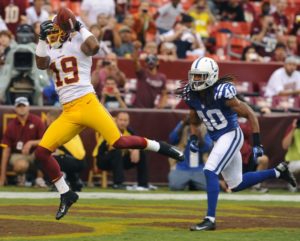 The Washington Redskins lost to the Indianapolis Cults 21-9  in a game that should’ve been an easy win.

Quarterbacks: Alex Smith(QB) threw 33-46 for 292 yards. Although he had no interceptions he also had no touchdowns for the game.  Grade: C

Running backs: The team was 22-65 for runs with no touchdowns. Most of the yards came from Adrian Peterson (RB) but of course was a team effort. Grade C

Receivers: The Redskins had 33 carries for 292 yards although they never made it to the end zone they were pulling in catches left and right although there were some drops they pulled in good amounts this week. Grade B

Overall: The Redskins had some good spots this week but they need to get to the end zone. Grade C+

Linebackers: Bringing pressure for all ends and good coverage on the tight ends we need more break through a for sacks though. Grade C

Secondary: The Redskins were able to grab 2 interceptions but also allowed 2 touchdowns which is something we need to stop doing if we’re gonna be successful this season. Grade C

Overall Defense: The Redskins did great in containing Indianapolis to 21 points but need to work on not allowing any points just like week one versus the Arizona Cardinals. Grade: C

Special Teams: The only source of points the Redskins had. Along with 3 field goals they did have one kick return for 19 yards. Grade A

Coaching staff: Attempted to bring competitiveness but just couldn’t get anything going although I have no doubt they’ll be working to improve the team during practice this week. Grade: C

The Redskins just didn’t bring their all in this game hopefully next week they can come out and get some work done where they don’t rely on special teams. Grade C